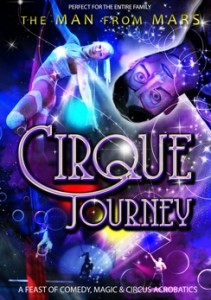 Fantastic in scope and brilliant in execution, this show has received rave reviews and standing ovations for its crowd-pleasing comedy and universal appeal. Mesmerizing magic, hilarious physical comedy, and circus acrobatics swirl together in this amazing spectacle.
Cirque Journey – The Man from Mars® – In the grand tradition of cirque and variety spectacle comes a modern exploration of our limitless imaginations. An elegant mixture of acrobatics, aerials, magic, and comedy replete with whimsical costumes and set to an evocative soundtrack, Cirque Journey: TMFM® provides a glimpse of what is achievable when we dare to dream.

WHO is Darren ‘Dizzy’ Partridge? Warning: Do you believe that it’s possible to actually die laughing? If so, Dizzy might be the most dangerous man alive. From the celebrated Apollo Theatre in London’s West End to the iconic Sydney Opera House, Darren “Dizzy” Partridge has been delighting audiences around the globe for more than a decade. An accomplished comedy magician and cirque variety performer, Dizzy is a regular headlining act on the luxury liners of both Celebrity and Norwegian cruise lines. He has also been featured as The Trickster and The Showman in the largest touring magic show in the world, The Illusionists. Dizzy’s wild combination of magic, physical comedy, and theatrical thievery, delivered with mischievous British charm, leaves his audiences both spellbound and gasping for breath. You are guaranteed an experience they will not believe and will never forget.

WHO is Janna? Janna Roukhmanova is a second-generation circus performer, and hails from Moscow, Russia. Her performance debut was at the age of nine as a contortionist, while her mother performed swinging Trapeze. Always practicing back stage and wanting to be like her mother, Janna’s dream came true when she turned 19 years old, performing her first aerial duet alongside her mother in Clyde Beatty Cole Bros. Traveling Circus. With a true heart for circus arts and performing, Janna mastered new acts including hula-hoops, various aerial acts, partnering aerial and adagio acts. In 2008 Janna along with her Husband Darren Partridge created a production company and talent agency. Since 2011, the husband and wife team has produced shows including Magic & Mayhem, The Man From Mars®, I’mpossible, and Beyond Belief. Janna has performed on all six continents and four seas, working in casinos, cruise ships, theaters, circuses, parks and arenas sharing her love for performing arts and putting big smiles on thousands of faces.

Cirque Journey – The Man From Mars® Show from Darren on Vimeo.